The emotional and psychological impacts of London’s ‘new’ urban renewal

Removing people from their homes in the name of regeneration is something that potentially affects their mental and physical well-being, but this is rarely explored via an experiential perspective that focuses on people’s own understanding of how their lifeworld has been disrupted. This paper considers the emotional and psychological impacts of recent council estate renewal on those displaced, or being displaced, from six London council estates. The paper reveals what it feels like to be displaced, and how these feelings — of losing one’s home and community — affect individuals’ psychological and indeed physical health. The paper concludes that displacement is often experienced as a form of slow violence which entails periods of waiting and uncertainty that cause multiple conflicts and anxiety, and that suggest that the benefits of renewal may never outweigh the costs for those who are displaced.

Loretta Lees is currently Professor of Human Geography at the University of Leicester, having previously been Professor in Human Geography at King’s College London, where she was also chair of the Cities Group. Loretta is an urban geographer internationally known for her research on gentrification/urban regeneration, global urbanism, urban policy, urban public space, architecture and urban social theory. She was identified as the 17th most referenced author in urban geography worldwide (Urban Studies, 2017) and the only woman in the top 20. She was an associate editor of the journal Geoforum and currently sits on 7 editorial boards, she was also chair of the Urban Geography Research Group of the Royal Geographical Society. Loretta is a scholar-activist who works with local communities fighting gentrification and has been an expert witness in three public inquiries. Her recent co-produced books include Planetary Gentrification 2016, Handbook of Gentrification Studies 2018, and forthcoming Defensible Space: mobilisation in English Housing Policy and Practice.

Phil Hubbard is currently Professor of Urban Studies at King’s College London. Phil has written widely-cited work on urban sociology, urban geography and social geographies: his work has principally focused on contested land uses in the city, and the resolution of social conflict via legal techniques of planning and licensing. This has combined Foucauldian theories of governmentality with insights derived from psychoanalytical and queer theory which focus on questions of disgust and exclusion. In 2017 Philip published a book on the retail gentrification of British cities, The Battle for the High Street and in 2018 issued the second edition of his textbook City. He is currently editor of the journal Urban Studies.

Lees, Loretta and Hubbard, Phil (2020, March 1). The emotional and psychological impacts of London’s ‘new’ urban renewal. In the Journal of Urban Regeneration and Renewal, Volume 13, Issue 3. 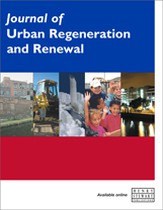