Embedding ethics in organisations and their operations: a dynamic approach

The traditional tasks of the ethics function(s) of an organisation consist in setting constraints on individual behaviours, imposing conflict of interest rules and compliance requirements in relation to processes and defining policy constraints in the form of corporate responsibility obligations. This approach has increasingly expanded from ‘ethics as a constraint’ to ‘ethics through information sharing’, by implementing training and disclosure programmes, developing risk assessment at process levels and agreeing to more policy scrutiny through transparency and benchmarking. This paper suggests that the traditional ethics functions should further expand and provide their organisations with an ethics strategy. Such functions should integrate organisational incentives with ethical considerations and embed these into individual attitudes and behaviours, processes, policies and strategies. These three stages (traditional function/information sharing/ ethics strategy) are summarised as a matrix that allows ethics practitioners to chart the desirable evolution of their organisation, seeking to increase both the sustainability and the resilience of organisations.

Jorge Dajani is the Chief Ethics Officer of the World Bank Group. In this capacity, Dajani leads the Bank Group’s ethics policies and initiatives on core values, training and ethics awareness, compliance, conflicts of interest and investigations of misconduct. He reports to the president of the World Bank Group. Throughout his professional career, he has held several positions in government, corporate and international financial institutions, including serving on the Boards of Governors and Boards of Directors of the main multi-lateral development banks. Prior to joining the World Bank Group, Dajani served as Alternate Executive Director of the International Monetary Fund. Previously, he held several senior positions on behalf of the government of Spain. He has been Director-General of International Finance at the Ministry of Economy and Chief Economist of the government. In this role, he headed the national delegation in the economic policy committees of the European Union and the Organization for Economic Co-operation and Development (OECD). He previously worked as Economic and Trade Commissioner to China and he has also been Senior Adviser for International Affairs to the Vice President and Minister of Economy. Dajani has a bachelor’s and a master’s degree in economics from Universidad Autónoma de Madrid and he is a member of Spain’s highest Civil Servant position as State Economist. He has been a professor in one of Spain’s leading master’s programmes in international business and he speaks Spanish, English, French and Mandarin.

Bertrand Andre Rossert is Adviser for Policies, Knowledge Management and Partnerships at the World Bank Group’s Ethics and Business Conduct Department (EBC). Before joining EBC as Manager of Financial Disclosure and Conflicts of Interest, Rossert headed the office of the Secretary General of the European Investment Bank. There, he contributed to the design of the response to the 2007 financial crisis as well as the creation of a new European institution to address similar issues in the future. Rossert also worked on the design and implementation of governance reforms — in particular as a result of the adoption of the Treaty on European Union. Rossert started his career working on the seminal UK privatisations as an economist and has been working in international organisations for more than 20 years — during which he participated as an economist in the appraisal of about 100 projects. As an evaluator, Rossert reviewed another 100 projects. Over nearly 15 years, he has specialised in ethics (including both meta-ethics and practical ethics), compliance and governance issues. Rossert holds an MSc in Economics from the London School of Economics, and graduated from the Paris Institute of Political Sciences (Sciences Po) and from the ESCP Paris Business School. He is also a certified neurolinguistic programming coach.

Dajani, Jorge and Rossert, Bertrand Andre (2020, March 1). Embedding ethics in organisations and their operations: a dynamic approach. In the Journal of Financial Compliance, Volume 3, Issue 3. 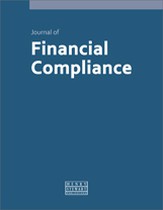